Women singers in Iran has been an issue since the Revolution. If you are a woman, you can sing as much as you can as soon as no one can hear you.  And since then women have been fighting for their right to sing publicly. And some succeeded. Some female singers started singing with male singers, and you can hear their voice on the background. Some actresses perform group a cappella singing in a movie (watch Sadatabad for a beautiful song performed by Mahnaz Afshar and Leyla Hatami). 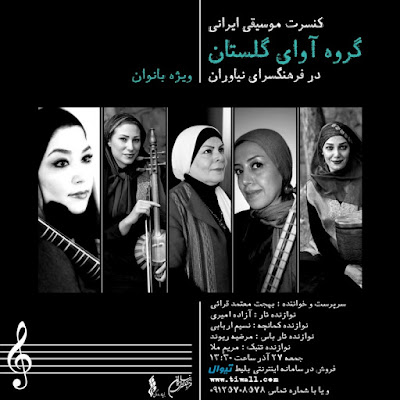 But nowadays female singers finally received their right to sing publicly on concerts. The only requirement is that the audience must be only female. Great progress, if you ask me!

If you are female and would like to hear Iranian traditional songs performed by a woman (although, personally, I still prefer male performance of traditional songs which is, well, more traditional :), then you should check out the concert at Niavaran Concert Hall next Friday at 1.30pm!

PS More details about the concert on the photo.