From the media you might have heard that Ramadan (Ramezan in Persian) is a holy month of fasting and like 90 percent of Iranians fast during this period of time. Even if you are inside in Iran, after seeing all the eateries closed during the day and most places like shops and parks getting crowded only after Iftar time (which is the official beginning of the night when Muslims can start eating), you might think that all the gossip that most Iranians follow the rules are true. But after taking a closer look you`ll see that Iranians spend Ramadan differently.
If you simply go out and walk on the streets of Tehran at midday, you`ll probably see people drinking water and even eating some snacks, sometimes even in front of the supermarkets where they`ve done the shopping. If you decide to see a movie in the cinema in the afternoon, you might see people with snacks, water and even sandwiches entering the cinema hall. Most people still try not to be seen while drinking or eating, while others seem to not care at all like that man standing in a shadow of the tree with a bottle of water in one hand and a cigarette in the other (smoking is also a part of fasting – it`s prohibited during the day).
As far as you might know, Quran can be interpreted in many ways like other Muslim holy texts. That gives Muslims freedom to interpret them in different ways as well as to their own good. In Iran there are several priests who have a lot of respect, a high position and a right to interpret Quran and give opinion on different matters. Different people follow different “marja-e taghlid” (literally translated from Farsi as source of copying) who actually provide different ways of avoiding some of the rules. For example, some say that if a doctor tells you that fasting will do harm to your health, you shouldn`t take it up. If you are travelling, you can also eat freely. So, as you see, Islam gives people plenty of ways to avoid following the rules word by word.

Every now and then the government has to remind Iranians that it`s fasting time and they shouldn’t forget that there are some people who actually fast (or maybe it`s done to make an impression that there are such people?). 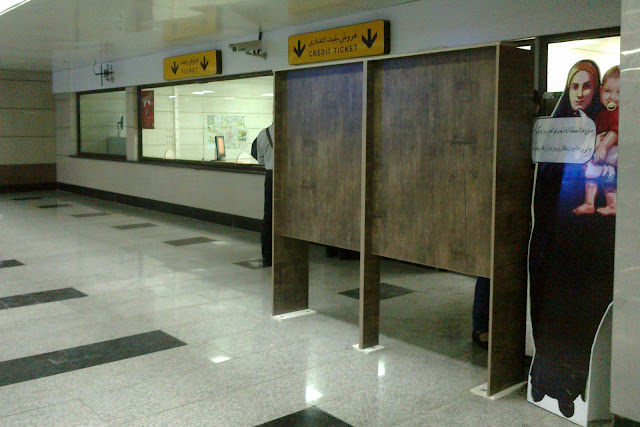 To do that city’s municipality this year, for example, installed screens in front of the drinking water fountains inside the metro stations and put a poster of a woman with a child saying that she can`t fast, but she respects those who do. But the paradox is that this place is still always crowded, and sometimes the line goes beyond the screen. So the question is – are there really people whose condition we should respect?
So don`t be afraid to come to Iran during Ramadan. If Iranians themselves don`t bother about the rules, they won`t expect you to do it. Some restaurants prepare some food like sandwiches and you won`t starve travelling around Iran during Ramadan!
35.69611151.423056